I just came across that great video on YouTube. It’s demonstrating a tactical approach into Naval Air Landing Facility San Clemente. It’s fun to see how they use the thrust reversers in flight to massively reduce speed…

Lockheed Martin is contracted with the U.S. Air Force to build 21 C 130J Super Hercules to replace aging fleets of combat search and rescue HC-130s and special operations MC 130s. The U.S. Air Force is authorized to acquire up to 31 HC/MC 130Js (11 HCs and 20 MCs). 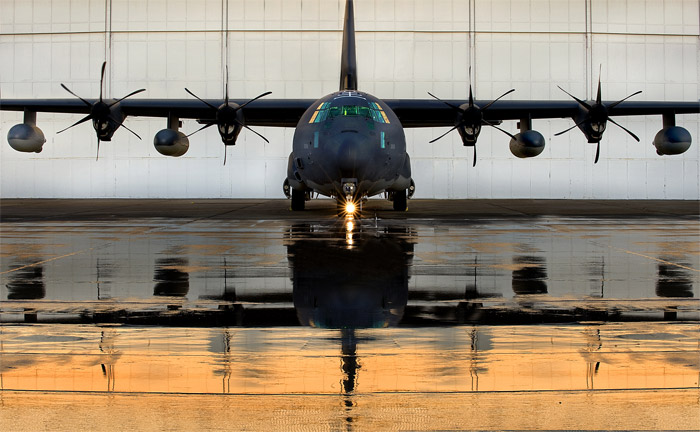 The new aircraft, which is based on a KC-130J tanker baseline, will have the Enhanced Service Life Wing, Enhanced Cargo Handling System, a Universal Aerial Refueling Receptacle Slipway Installation (boom refueling receptacle), an electro-optical/infrared sensor, a combat systems operator station on the flight deck, and provisions for the large aircraft infrared countermeasures system.

Lockheed Martin released a video of the first Lockheed Martin F-35B Lightning II stealth fighter, passing overhead at 40 knots (46 mph) prior to a slow landing at Naval Air Station Patuxent River, Md. The flight was one of the last missions before the aircraft’s first vertical landing, and confirmed the jet’s power and controllability at very low speeds. The aircraft’s short takeoff/vertical landing (STOVL) propulsion system generates more than 41,000 pounds of vertical thrust, and enables airspeeds from zero to Mach 1.6. The F-35B will be flown by the United States Marine Corps, the United Kingdom’s Royal Air Force and Royal Navy, and the Italian Air Force and Navy. It will be capable of operating from small ships and austere bases near front-line combat zones. 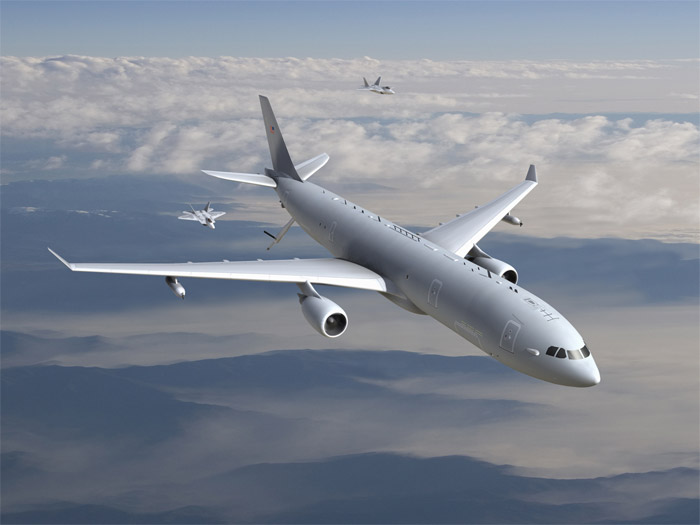 “In the course of the flight we’ve conducted initial evaluation of the aircraft controllability, engine performance and primary systems operation, the aircraft had retracted and extracted the landing gear. The aircraft performed excellently at all flight-test points scheduled for today. It is easy and comfortable to pilot”, – said the pilot Sergey Bogdan. 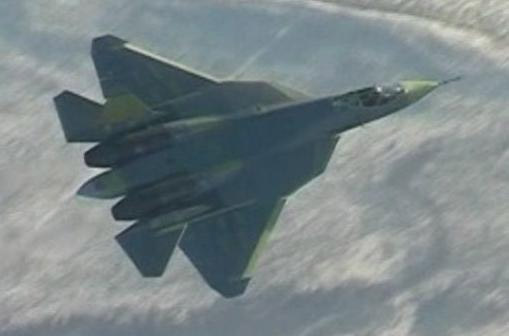 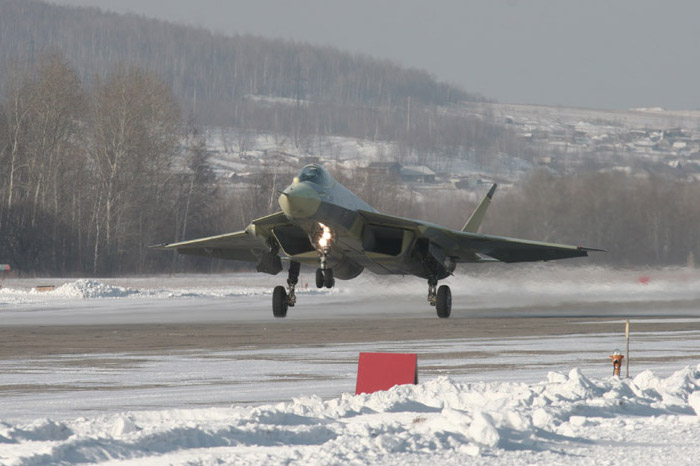 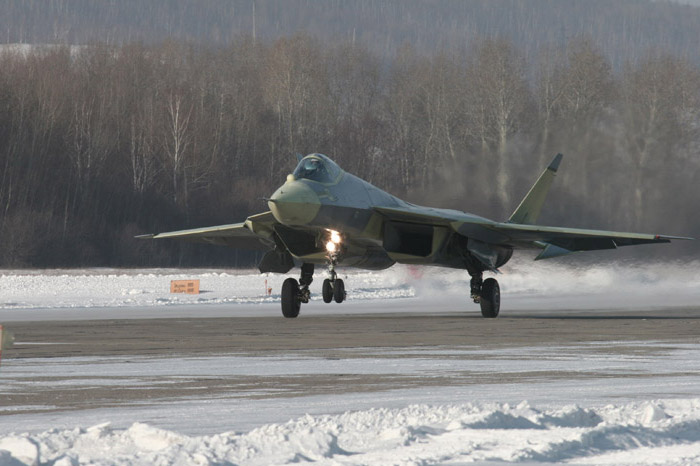 The current prototype is fully developed and intended to replace the MiG-29 Fulcrum and Su-27 Flanker in the Russian inventory and serve as the basis of the Sukhoi/HAL FGFA project being developed with India. As fifth generation jet fighter, it is designed to directly compete with the F-22 Raptor and F-35 Lightning II.

Russia has started tests of its fifth generation fighter – the Sukhoi T-50 PAK FA! The project in which India is also a partner, prepares to compete with the F-22 Raptor.

The first prototype of the aircraft rolled out on the runway of KNAAPO aircraft plant in Komsomolsk-on-Amur in the country’s far east. The test pilot switched on its engines and made two runs on the runway.

The Sukhoi T-50 PAK FA has a range of 5,500 km, and is scheduled to enter service with the Russian Air Force in 2015. Ahead of the maiden flight scheduled for this month, first runway tests of the fighter were held in December.

Although there is no reliable information about the PAK FA’s specifications yet, it is known from interviews with people in the Russian Air Force that it will be stealthy, have the ability to supercruise, be outfitted with the next generation of air-to-air, air-to-surface, and air-to-ship missiles, incorporate a fix-mounted AESA radar with a 1,500-element array and have an ‘artificial intellect’. The PAK FA will use on its first flights 2 Saturn 117S engines (about 14.5 ton thrust each). The 117S is an advanced version of the AL-31F, but built with the experience gained in the AL-41F program. The AL-41F powered the Mikoyan MFI fighter (Project/Article 1.44). Later versions of the PAK FA will use a completely new engine (17.5 ton thrust each), developed by NPO Saturn or FGUP MMPP Salyut.

Currently the only developed fifth generation jet fighters are the F-22 Raptor and the F-35 Lightning II. 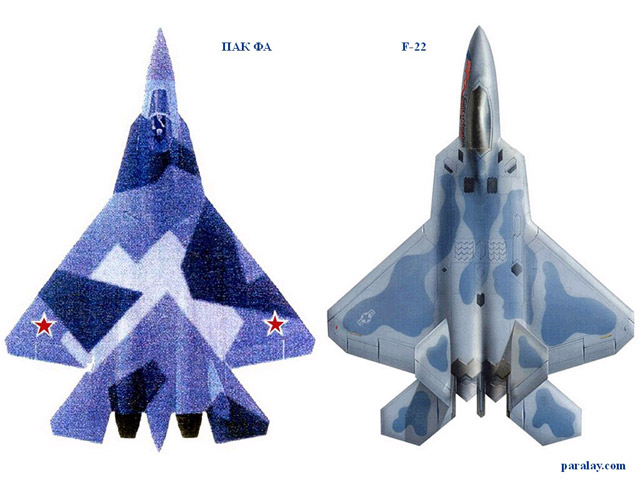 Under an agreement signed in October 2007, India has also joined Russia in the project based on Sukhoi’s PAK FA project, and the two nations are in negotiations to finalise the commercial contract for the deal.

At least three prototypes have been built by the KNAAPO aircraft plant.

Today Airbus Military’s all-new A400M took off for its maiden flight from Seville Airport in Spain. The first entirely new airlifter of the 21st Century took to the air from runway 09 at 10:15 local time (09:15 UTC).

The aircraft, with a take-off weight of 127 tonnes, was equipped with 15 tonnes of flight-test equipment including two tonnes of water ballast and its performance was being monitored in realtime by teams of engineers in Seville and Toulouse using state-of-the-art air-ground telemetry. The crew explored the aircraft’s handling characteristics in the various flap configurations, checked the powerplant operation and made initial evaluations of the aircraft’s systems.

Its four all-new Europrop International (EPI) TP400D turboprop powerplants producing 11,000shp (8,200kW) each are the most powerful propeller engines ever fitted to a Western aircraft.

The duration of the flight was 3h 47min and ended with a landing back at Seville in front of more than 2,000 media, VIPs and Airbus Military staff.

Video of the A400M first flight:

Over the last four weeks the aircraft has been extensively tested on the ground in an increasingly challenging programme leading up to the first flight.

The engines have been run at full power, the electrical systems and on-board data network exhaustively tested, and numerous taxying runs at progressively higher speeds have been performed culminating in a rejected take-off test at a speed of 123kt (227km/hr) on 8th December.

Today’s first flight marked the beginning of a test campaign that will see some 3,700 hours of flying by an eventual five aircraft conducted between now and entry-into-service at the end of 2012. The A400M will receive both civil certification by the European Aviation Safety Agency (EASA) and military certification and qualification.

The A400M was designed from the outset as an aerial refueller and can offload fuel to both fighters and helicopters at their preferred speeds and heights.

The A400M features the same proven fly-by-wire controls technology as Airbus’ highly successful airliner family and an advanced cockpit that has evolved from that of the A380. Carbon-fibre reinforced plastic (CFRP) wings and other large structures bring weight and strength advantages and cut the risk of corrosion.

Photo of the A400M cockpit: 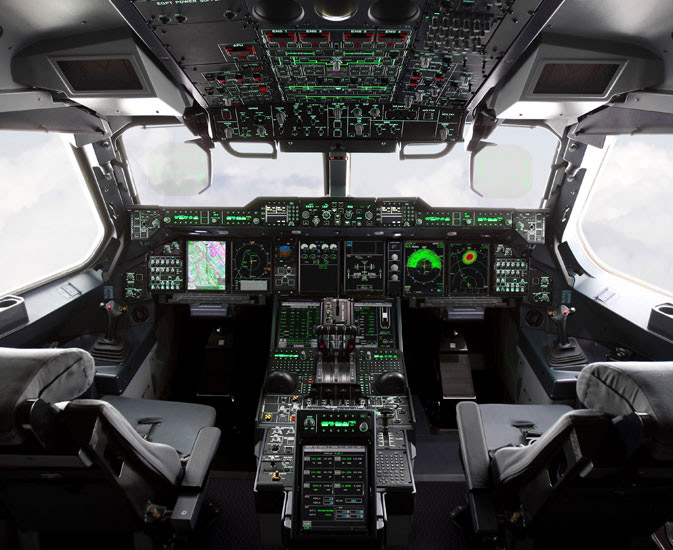 A total of 184 aircraft have so far been ordered by Belgium, France, Germany, Luxembourg, Malaysia, Spain, Turkey and the United Kingdom,

The first flight of the Airbus A400M is finally scheduled for tomorrow, Friday December 11, 9:00 AM GMT+1!

You can watch the maiden flight that will take place in Seville (Spain) – LIVE via webcast at http://www.a400m.com

The A400M is the new European military airlifter that will replace the aging C-130 Hercules and C-160 Transall. The turboprop Airbus A400M features a fly-by-wire Flight Control System with sidestick controllers. 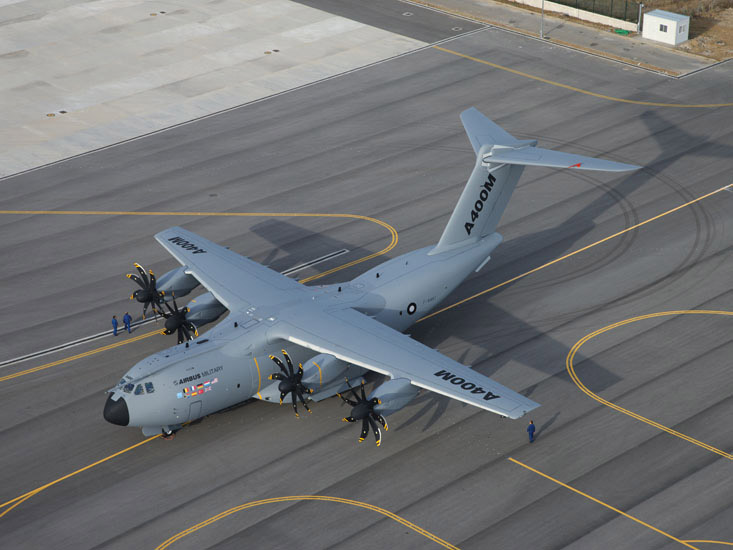 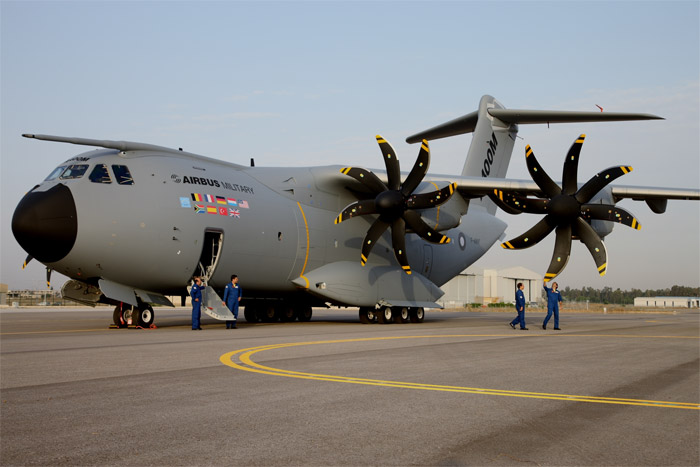 Airbus recently published the following video showing APU and engine start-up of the first Airbus A400M. The Airbus A400M is a European four-engine turboprop military transport aircraft that can be configured for aerial refueling. It has been designed by Airbus Military corporation to replace a variety of aircraft, including the Lockheed Martin C-130 Hercules and the Transall C-160.