The Pentagon recently announced, that Boeing has won the $35 billion USAF tanker contract. The contract means Boeing will initially build 179 of its 767-based KC-46A tankers to replace the Air Force KC-135 tankers.
Boeing must design, develop, manufacture and deliver the first 18 combat-ready airplanes by 2017. The first tanker is scheduled to fly in 2015.

The contest was not just about the better plane but also about monopoly and immense lobbying – Boeing spent more than $17.8 million on lobbying, just in 2010.
In 2008 U.S. Air Force already selected the competing KC-45 Tanker offered by EADS/Northrop Grumman but the selection was revised later after protests filed by Boeing.

EADS has three days to ask for a debriefing as to why exactly it lost. That debriefing must take place within five days, after which EADS has another five days to decide if it wants to formally protest the decision. 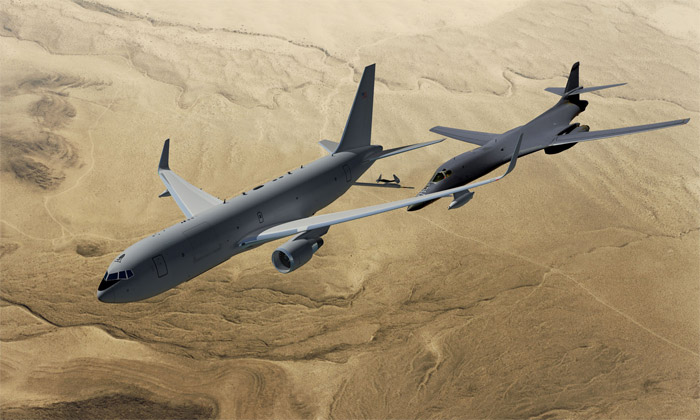 EADS North America officials expressed disappointment and concern over the announcement that the US had selected a “high-risk, concept aircraft over the proven, more capable KC-45 tanker”.

“This is certainly a disappointing turn of events, and we look forward to discussing with the Air Force how it arrived at this conclusion,” said EADS North America Chairman Ralph D. Crosby, Jr. “For seven years our goal has been to provide the greatest capability to our men and women in uniform, and to create American jobs by building the KC-45 here in the U.S. We remain committed to those objectives.”

If selected, EADS North America had committed to build the KC-45 at a new production facility in Mobile, Alabama, with a U.S. supplier base of nearly a thousand American companies.

“With a program of such complexity, our review of today’s decision will take some time,” Crosby said. “There are more than 48,000 Americans who are eager to build the KC-45 here in the U.S., and we owe it to them to conduct a thorough analysis.”

“The new 747-8 Intercontinental features the latest in innovative technologies — applying many of the breakthroughs also found on the 787 Dreamliner,” said Boeing Commercial Airplanes President and Chief Executive Officer Jim Albaugh. “We think our customers will value the low operating costs and passengers will enjoy the comfort of the striking new interior.”

“The 747-8 Intercontinental will be a great complement to our fleet, fitting nicely into the 400-seat category, improving our fleet’s eco-efficiency even further,” said Nico Buchholz, executive vice president, Lufthansa Group Fleet Management. “As launch customer, we are looking forward to welcoming this new aircraft to our fleet next year as it adds to our ongoing fleet modernization and environmental efforts.” 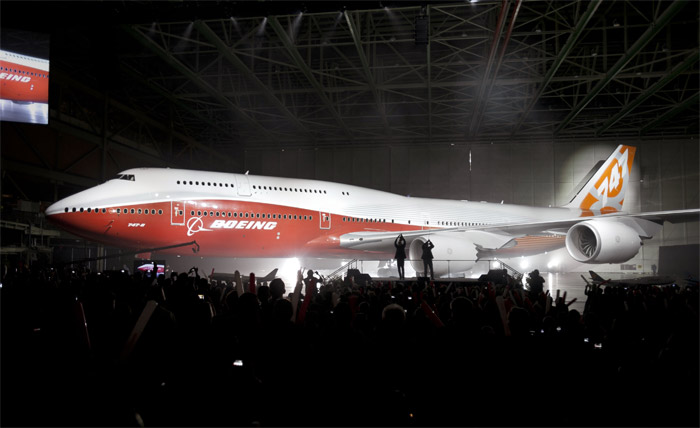 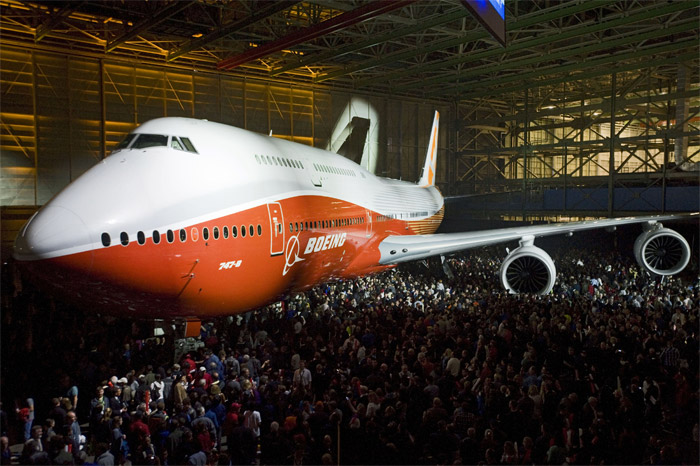 The 747-8 Intercontinental will have the lowest seat-mile cost of any large commercial jetliner, with 12 percent lower costs than its predecessor, the 747-400. The airplane provides 16 percent better fuel economy, 16 percent less carbon emissions per passenger and generates a 30 percent smaller noise footprint than the 747-400. The 747-8 Intercontinental applies interior features from the 787 Dreamliner that includes a new curved, upswept architecture giving passengers a greater feeling of space and comfort, while adding more room for personal belongings.

The airplane unveiled today is painted in a new Sunrise livery of red-orange that only will appear on the first 747-8 Intercontinental and is a significant departure from Boeing’s standard blue. The new color palette honors many key Boeing customers whose cultures recognize these colors as symbols of prosperity and good luck.

As we all know, the guys at Boeing are a bunch of whiners when it comes to topics regarding its rival Airbus. At least since the tanker-fight and the latest WTO dispute they don’t pass up the chance to release statements with nothing but hot air and made-up “facts”. But now Airbus has jumped on the bandwagon as well. According to SeattlePi the European plane maker just released this ad, “correcting” a misleading Boeing ad regarding the WTO findings on illegal subsidies that was released earlier, giving its American rival an “F”. 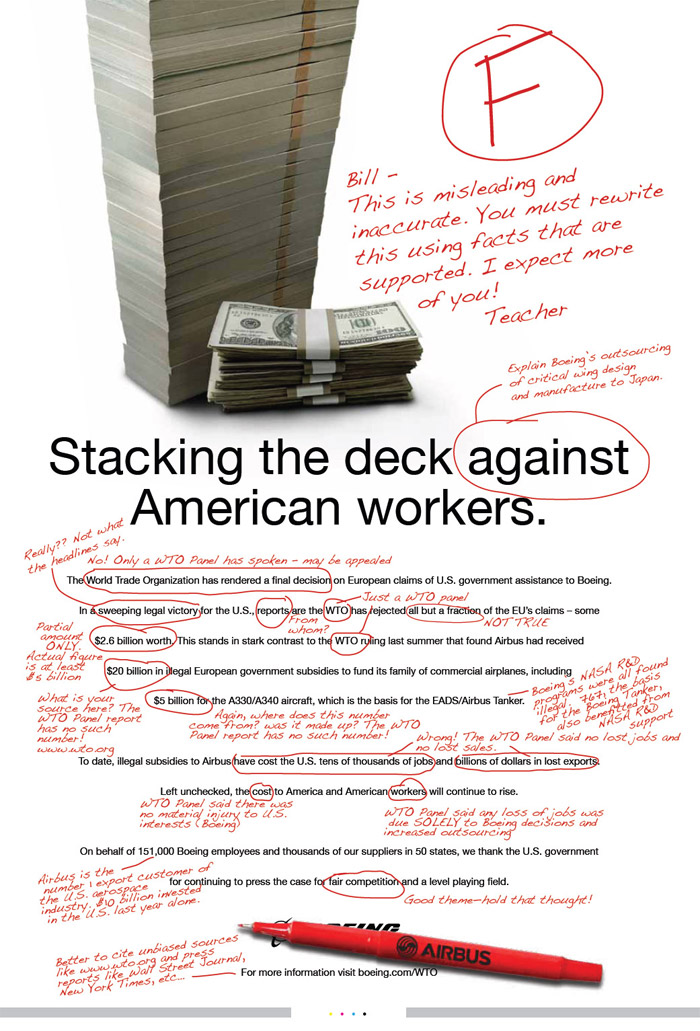 On Feb. 2, 2011 Boeing marked an important milestone in the company’s history. Boeing celebrated the rollout of the 1000th 767 airplane.

The 1,000th airplane is a 767-300ER (extended range) passenger model for ANA (All Nippon Airways) and was the final 767 to complete assembly on the current production line. Final production work already is underway on the 1,001 unit in a new, smaller bay that repositions the production line toward a leaner, more efficient operation. 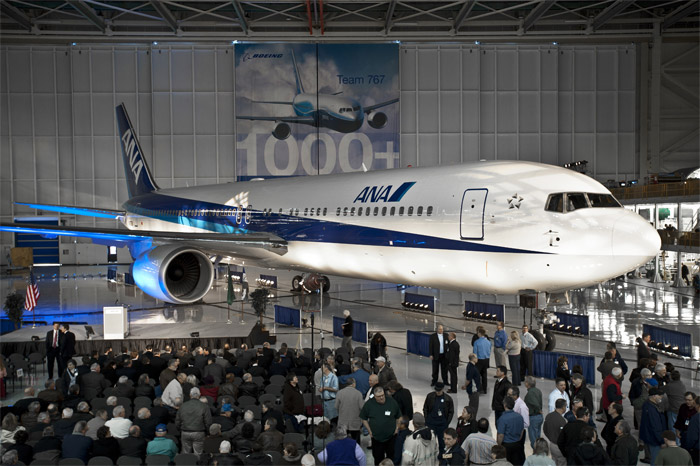 Boeing has offered the 767 as the platform for its NewGen Tanker if it wins the U.S. Air Force KC-X Tanker competition. A decision on the contract award is expected early this year.

Boeing today announced a new date for first delivery of the Boeing 787 Dreamliner. The plane maker expects delivery of the first 787 in the third quarter of this year. The new delivery date reflects the impact of an in-flight electrical fire on ZA002 during testing and subsequently modifications to electrical power distribution panels in the flight test and production airplanes. 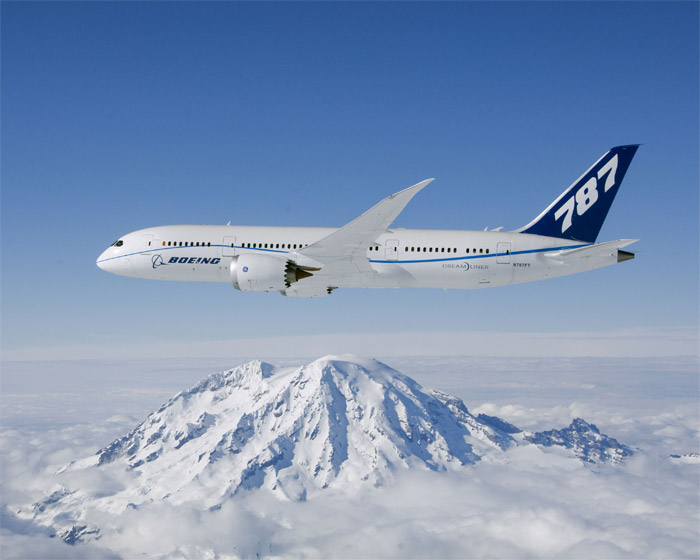 “This revised timeline for first delivery accommodates the work we believe remains to be done to complete testing and certification of the 787,” said Scott Fancher, vice president and general manager of the 787 program. “We’ve also restored some margin in the schedule to allow for any additional time that may be needed to complete certification activities,” Fancher said.

The 787 program has been gradually returning individual airplanes to the flight test program. After receiving interim software and hardware improvements, four flight test airplanes have been subjected to extensive ground testing and a thorough review to ensure their readiness to return to flight. The remaining two airplanes will be returning to flight in the days ahead to bring the full flight test fleet back up to flight status.

After investigation of the onboard electrical fire on ZA002, earlier this month, Boeing now is in need to make changes to its 787 design. Boeing is developing design changes to power distribution panels on the 787 and updates to the systems software that manages and protects power distribution on the airplane.

Engineers have determined that the fault began as either a short circuit or an electrical arc in the P100 power distribution panel, most likely caused by the presence of foreign debris. The design changes will improve the protection within the panel. Software changes also will be implemented to further improve fault protection.

The P100 panel is one of five major power distribution panels on the 787. It receives power from the left engine and distributes it to an array of systems.

A revised 787 program schedule is expected in a few weeks.

Last week an improved Boeing Next-Generation 737-800 successfully completed its first test flight. Aerodynamic and engine changes included in the package will reduce fuel consumption by 2 percent. Boeing is phasing the changes into production mid-2011 through early 2012.
One percent of the savings comes from reducing resistance as air flows around the airplane. The upper and lower anti-collision lights change from round to a more aerodynamic teardrop shape. Wheel-well fairings are re-contoured to smooth the air flow near the main landing gear. A redesign of the environmental control system, exhaust vent and streamlined wing slat and spoiler trailing edges round out the aerodynamic changes.

After a fire on one of the 787 Dreamliner test planes, Boeing has grounded all 787s until they investigated the cause of the incident.

On Tuesday a Boeing 787 test flight was forced to do an emergency landing at Laredo, Texas after a fire broke out in the electrical-equipment bay, which is located underneath the passenger cabin. The plane, Dreamliner No.2 (ZA002), was evacuated via emergency slides, nobody was injured.
According to Seattle Times, the fire affected the cockpit controls – the plane lost its primary flight displays and its auto-throttle.
Update: Boeing today confirmed that the plane lost its primary electrical power as a result of the fire. The Ram Air Turbine (RAT) has been successfully deployed.

It’s not known how long the suspension will last.
The Boeing 787 program is already three years behind schedule.

Update November 12 2010:
Boeing today released further information about this incident. Investigation has determined that a failure in the P100 panel led to a fire involving an insulation blanket. The insulation self-extinguished once the fault in the P100 panel cleared. The P100 panel on ZA002 has been removed and a replacement unit is being shipped to Laredo. The insulation material near the unit also has been removed.
Damage to the ZA002 P100 panel is significant. Initial inspections, however, do not show extensive damage to the surrounding structure or other systems.
The P100 panel is one of several power panels in the aft electronics bay. It receives power from the left engine and distributes it to an array of systems. In the event of a failure of the P100 panel, backup power sources – including power from the right engine, the Ram Air Turbine (RAT), the auxiliary power unit (APU) or the battery – are designed to automatically engage to ensure that those systems needed for continued safe operation of the airplane are powered.