It will be interesting to see if and how the US Army will use this strange ugly bird. Maybe it will be used for some MEDEVAC missions. It will be difficult to fly for sure, with this heavy propeller engine mounted on its tail.

A CH-46 Sea Knight helicopter catches fire during start from a aircraft carrier. Probably the fire was caused by a engine failure.

Two news helicopters covering a police chase on live television collided and crashed to the ground Friday, killing all four people on board in a plunge that viewers saw as a jumble of spinning, broken images.

Both helicopters went down in a park in central Phoenix and caught fire. No one on the ground was hurt.

TV viewers did not actually witness the accident because cameras aboard both aircraft were pointed at the ground. But they saw images from one of the helicopters break up and begin to spin before the station abruptly switched to the studio.

Television station KNXV reported that it owned one of the choppers. The other was from KTVK. A pilot and photographer aboard each chopper were killed.

KNXV reporter Craig Smith, who was among the dead, was reporting live as police chased a man driving a construction truck who had fled a traffic stop and was driving erratically, hitting several cars and driving on the sidewalk at times.

Police had blown the truck’s tires, and the man eventually parked it, then carjacked another vehicle nearby.

After the picture broke up, the station switched to the studio and then briefly showed regular programming, a soap opera, before announcing that the helicopter had crashed.

The two choppers came down on the grass lawn in front of a boarded-up church at the park. Firefighters swarmed to the area as thick black smoke rose from the scene.

Mary Lewis said she was stuck in traffic with her four grandsons and was watching the helicopters. She turned to talk to the children, then saw a fireball in the air when she looked up again.

“I looked up and I see this ‘boom,’ and I see one of the helicopters coming down, and I said ‘Oh my God,'” Lewis said. She said she went to the crash site to help, but there was nothing she could do.

FAA spokesman Ian Gregor said the FAA is reviewing air traffic control tapes to see if pilots were talking to controllers at that time.

“Typically air traffic controllers clear helicopters into an area where they can cover a chase like this,” Gregor said. “Once they are in the area, the pilots themselves are responsible for keeping themselves separated from other aircraft.”

Barbara Cochran, president of the Radio-Television News Directors Association in Washington, said the association does not track fatalities among helicopter news pilots, but she could not recall another example of two news choppers colliding while covering a story.

“The news directors at the stations are members of our association, and our heart really goes out to them in a situation like this,” she said. “These pilots, they are very professional. They combine the skills of pilots and skills as journalists. It’s something that’s very, very sad.”

The suspect in the police pursuit eventually jumped from the truck and was barricaded in a home, authorities said. A SWAT team was preparing to go in to arrest the suspect.

The Boeing Company has received U.S. Army authorization for full-rate production and fielding of the new CH-47F Chinook helicopter.
The CH-47F successfully completed U.S. Army operational testing at Fort Campbell, Ky., in April, and now will move forward with First Unit Fielding in July.
“This authorization enables us to support the needs of the warfighter today and well into the future,” said Jack Dougherty, director of Boeing H-47 programs.
“The Army put the CH-47F to the test with over 60 hours of rigorous flight test in numerous simulated mission scenarios, including air assault, combat resupply and transport operations,” said Ken Eland, Boeing CH-47F program manager. “The successful test and evaluation of the aircraft is a validation of the hard work and dedication of everyone involved in the H-47 program and proves again that the Chinook is ready to meet the diverse requirements of the warfighter.”
Operational testing of the CH-47F was conducted by Bravo Company (Varsity), 7th Battalion, 101st Aviation Regiment, 159th Combat Aviation Brigade, 101st Airborne Division (Air Assault).
The CH-47F helicopter features

Powered by two 4,868-horsepower Honeywell engines with digital fuel controls, the new CH-47F can reach speeds greater than 175 mph and transport payloads weighing more than 21,000 lbs. The CH-47F, with the Robertson Aviation Extended Range Fuel System, has a mission radius greater than 400 miles.

The AS-355 helicopter belonging to Balt Avia crashed around 6:30 p.m. (1430 GMT) Saturday about 75 kilometers (45 miles) west of St. Petersburg, Russia, on the shores of the Gulf of Finland.

A crew member and two passengers were injured and rescuers were searching for the lost pilot. One passenger was unharmed.

The officials said the cause of the crash was being investigated.

Piasecki Aircraft is preparing its X-49 experimental compound helicopter for a first flight before the end of June. [Source]

The modified Sikorsky H-60, with wings and tail-mounted variable-thrust ducted propeller (VTDP), has been moved to Boeing’s Wilmington, Delaware facility for ground and flight testing. 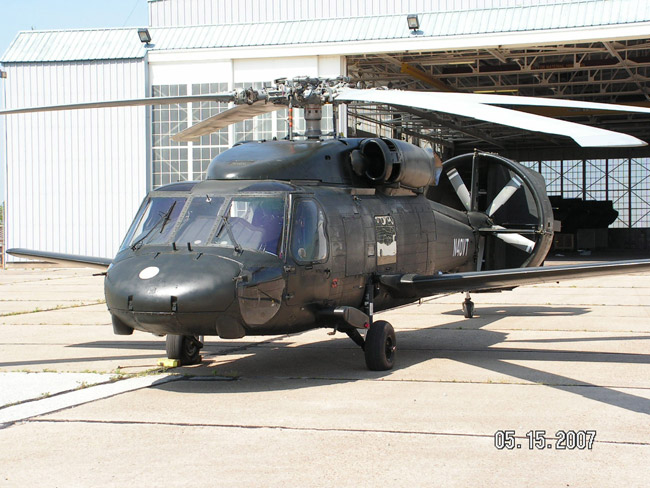 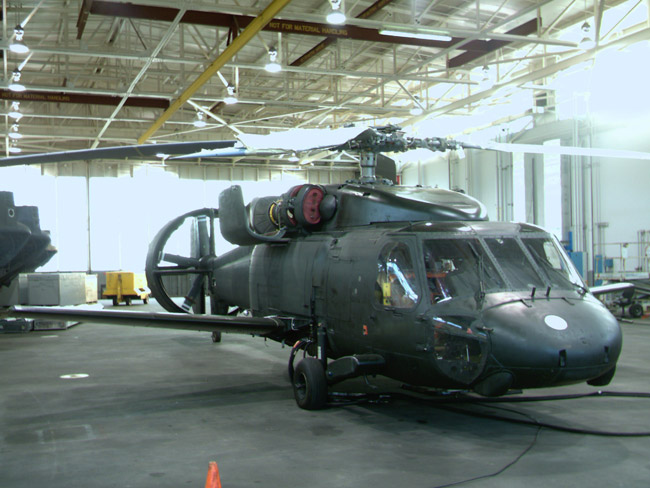 The X-49A “Speedhawk” is an experimental helicopter currently under development. It is the subject of a $US 26.1-million U.S. Navy-sponsored project that consists of a Sikorsky YSH-60F helicopter modified by Piasecki as a testbed to test the “Vectored Thrust Ducted Propeller” (VTDP) system. One YSH-60F will be converted to test the feasibility of VTDP under an advanced technology demonstration program. The YSH-60F is powered by two General Electric T700-GE-401C engines.

The demonstration contract was awarded in October 2000 by the Naval Air Systems Command to Piasecki Aircraft. Piasecki will install a lifting wing with flaperons and a vectored-thrust ducted propeller (VTDP), or “ring tail,” to a U.S. Navy Sikorsky YSH-60F.

The compound helicopter technology that will be added to the YSH-60F was first demonstrated in trials of the Piasecki 16H-1 and 16H-1A in the early 1960’s, when the helicopters were flown at speeds up to 225 mph (360 km/h).

The X-49A YSH-60F flight demonstrator will be updated with a lifting wing taken from an Aerostar FJ-100 business jet. A ring tail will also be added and the helicopter drive train will be modified to accommodate VTDP. Piasecki will conduct integrated tests of the modified drive train at the Navy’s helicopter transmission test facility.

The cockpit controls will be modified with the addition of a manual prop pitch override on the collective for the ring tail. This will be the only visible change to the aircraft’s existing mechanical controls in the cockpit. The other controls needed to operate the compound helicopter’s systems will be integrated into the aircraft’s existing mechanical controls to reduce pilot workload. Weight added to the X-49A YSH-60F will be about 1,600 lb (725 kg). It will have an unrefuelled combat radius of 1,411km following a rolling take-off, and 963km after a vertical take-off, representing a three-fold increase over the standard H-60.

As of 2004 the X-49A YSH-60F/VTDP demonstration program was being transitioned from the U.S. Navy to the U.S. Army.

The Marine Corps announced Friday the V-22 Osprey will see action in Iraq in September when it will be deployed for seven months to help move troops and equipment. Gen. James T. Conway, commandant of the Marine Corps, made the announcement in the Pentagon, in what was called a historic move for the Marines.

The Osprey, manufactured jointly by Textron’s Bell Helicopter in Texas and Boeing in Ridley Township, will be the first tilt-rotor aircraft used by the military. The Osprey can take off and land like a helicopter, tilt its rotors and then fly like an airplane.

The aircraft has been much-maligned for operational test failures over the years, including two fatal flights in 2000, but has the capabilities to fly faster, farther and higher than the CH-46 Sea Knight it is replacing.

Marine Medium Tiltrotor Squadron 263, or VMM-263, which consists of 171 officers and Marines, will operate 10 Ospreys — known as the MV-22 in the Marine Corps.

“The commander had decided this is where the greatest need for this capability is,” said Lt. Col. Scott Fazekas, spokesman for the Marines, explaining the decision to deploy the aircraft to Iraq.

Fazekas said he has not spoken with the pilots who will be flying the V-22 in Iraq, but he has “spoken to several people who have flown the V-22 and they have every confidence in the aircraft.”

The Marines also said VMM-263 could use the Osprey to conduct casualty evacuations or liaison work in a combat environment.

Boeing spokesman Jack Satterfield said the company had expected the aircraft to be used in Iraq because of its improved capabilities.

This will be the very first use in combat for the MV-22 Osprey.

A helicopter departing from a ship during bad, stormy weather gets in serious trouble. It’s only a matter of very much luck nobody on the heli pad got hurt or killed.