Boeing announced that Chile’s LAN Airlines will receive 32 787 Dreamliners, marking the largest 787 acquisition to date for Latin America. The Santiago-based carrier has ordered 26 airplanes from Boeing, and will lease an additional six 787-9s from International Lease Finance Corp.
In addition to the Dreamliner order, Boeing said LAN also has committed to acquiring four 777 Freighters – two from Boeing and two to be leased from GE Commercial Aviation Services (GECAS). 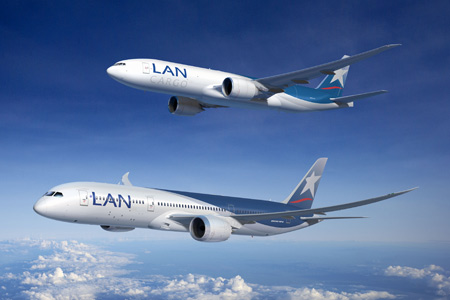 The order for 26 Dreamliners, consisting of a mix of 787-8s and 787-9s, is worth approximately $ 4.5 billion at published list prices. The two 777 Freighters are similarly valued at approximately $ 500 million. The two direct-purchase 777 Freighters were previously attributed to an unidentified customer on Boeing’s orders and deliveries Web site.
“This order reaffirms support for Boeing’s Dreamliner from the largest and one of the most profitable airlines in Latin America,” said John Wojick, Boeing Commercial Airplanes vice president, Sales, Latin America and the Caribbean. “With the 787, LAN will be able to provide its passengers with the very best in long-range air travel, including larger windows, higher cabin humidity, more space and a lower cabin altitude.
“In addition, LAN’s long-haul cargo operations will gain unmatched efficiency with the 777 Freighter, which offers more capacity and greater range than any other twin-engine freighter,” Wojick said.
Thus far, two other Latin American carriers have committed to the 787 Dreamliner: Aeromexico, with three leased, two purchased, and Colombia’s Avianca, which has ordered 10.
The Boeing 787 Dreamliner, scheduled for entry into service in 2008. Thus far, 51 airlines have logged 736 orders, making the Dreamliner the most successful commercial airplane launch in history.
The 777 Freighter is the sixth and newest member of the 777 family of airplanes and builds upon the family’s extensive use of advanced technologies. The 777 Freighter is based on the 777-200LR passenger model and is designed to facilitate easy interlining with the Boeing 747 freighter fleet. Eleven customers have ordered 82 777 Freighters, which are scheduled to enter service beginning in the fourth quarter of 2008.