On Monday Virgin Galactic unveiled SpaceShipTwo, the world’s first commercial spaceline, at Mojave Spaceport. The Virgin Galactic spaceline plans to operate a fleet of five of these craft in passenger-carrying private spaceflight service starting no earlier than 2011. More than 65,000 would-be space tourists have applied for the first batch of 100 tickets. The price will initially be $200,000. The duration of the flights will be approximately 2.5 hours, though only a few minutes of that will be in space.

Sir Richard Branson and Burt Rutan led the press conference, special recognition went to the team at Scaled Composites whose hard work and dedication have made this happen. Governors Bill Richardson and Arnold Schwarzenegger both contributed at the press conference, celebrating this huge milestone and also joining Holly, Richard’s daughter in naming the spaceship, VSS Enterprise. 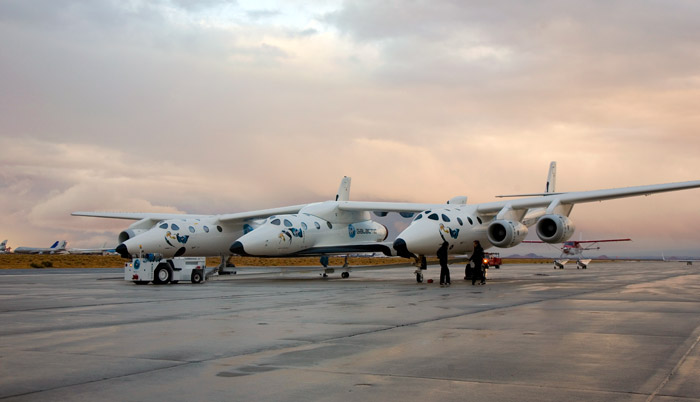 The spaceship was carried down the runway by her mothership, VMS Eve, to a spectacular display of lights, music and snow.