Another news from Embraer this week – The Brazilian aircraft manufacturer yesterday confirmed the sale of 8 Super Tucano to the government of the Dominican Republic through a contract that was finalized at the end of last year. The aircraft will be operated by the Dominican Air Force to perform internal security and border patrol missions, within an operations theater focusing on fighting the drug traffic. 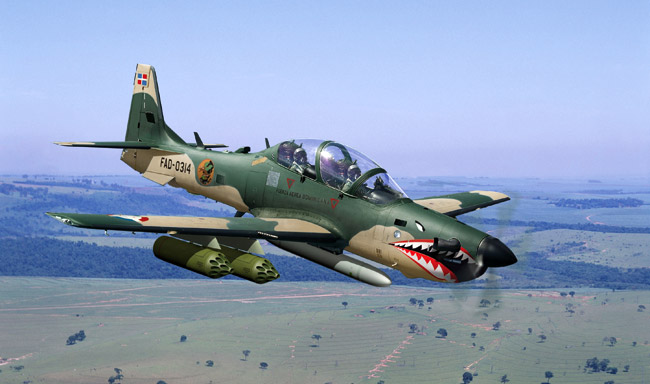 This is the third export contract for the this aircraft, after sales that were made to the Air Forces of Colombia (FAC) and Chile (FACH).

To date, 63 units of the Super Tucano have already been delivered to the Brazilian Air Force (Força Aérea Brasileira – FAB) and 25 to the FAC, and they are successfully used for border surveillance and other operational missions. In all, 144 aircraft have been sold to four Latin American customers. The Air Forces of Colombia received its 25th Super Tucano in August of last year, thus finalizing the deliveries begun to this customer, in December 2006. The contract was the first export of this aircraft, and the agreement included TOSS (Training and Operation Support System), an advanced training and operational support system with ground stations. The FACH agreement for the sale of 12 aircraft was also announced by Embraer in August 2008.

The Super Tucano went into operation with the FAB in December 2003, to be used for pilot training, as well as for operational missions. This capability ranks the Super Tucano as the world’s only aircraft in production that is able to handle advanced pilot training and surveillance and counter-insurgency missions, even at night, using night vision goggles and electro-optical and infrared sensors.

3 thoughts on “Embraer sells Super Tucano to the Dominican Republic”