Seems to be some GPS error. It’s quite funny though. 🙂 It’s a bird. It’s a plane. It’s a….pig?? This holiday season, you may find yourself flying with pigs! Proving that pigs really can fly, Capital One put six giant pigs into flight today to make a point about its “too good to be true” features of the new rewards money market account. The pigs are taking flight on the exterior of a Skybus Airline A319 passenger jet, and the plane will fly passengers nationwide across the US for six months. 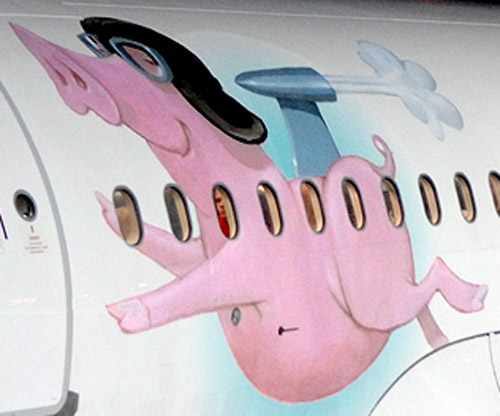 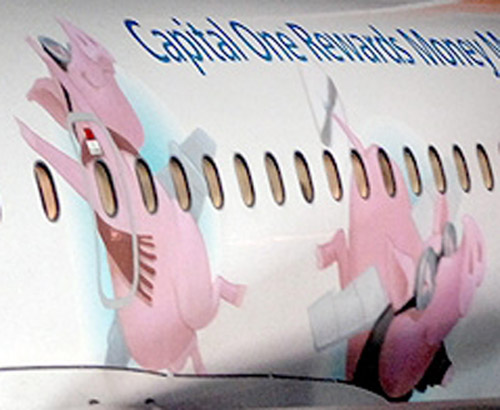 The Capital One flying pig plane features six giant flying pig illustrations, adorned with bomber jackets, scarves and aviator goggles. Each of the pigs is approximately 10 feet high with a wingspan of 13 feet. For the next six months, flights on the Capital One Rewards Money Market pig plane will be available to the public on regularly scheduled Skybus Airline routes.

Capital One Financial Corporation’s new Rewards Money Market account earns consumers travel miles for saving money instead of spending it. The commercial jet will travel across the sky as a larger-than-life reminder that smart saving (putting your pennies in a Capital One Rewards Money Market account instead of a piggy bank) can really take you places. “Many consumers think that a product that rewards you for saving sounds too good to be true,” said Pam Girardo, spokesperson for Capital One Direct Banking. “So we decided to drive home the message in a visual way. If customers think they’ll earn rewards for saving money ‘when pigs fly,’ then we’ll put pigs in flight!”.

Delta Air Lines created a series of funny animated videos. You have to check these out! These videos are great and, unfortunately, so true!
So don’t hesitate to visit the Planeguage YouTube Channel and the Delta Blog.
My personal favorite is the “Shady Lady” 🙂

This video is just hilarious! The comedy security announcement made by a funny Southwest flight attendat is amusing the whole cabin.

But wait! There’s more! 🙂
This is probably the same guy.

And here we have a Northwest flight attendant doing magic tricks!

Once again a funny picture I found on a.net. 😀

Private/Commercial/Multi-IFR: $50,000
ATPL and related jet training: $100,000
Having a picture of you picking your nose on THE aviation website while flying the biggest commercial airliner ever built: Priceless