Only 10 month after a GOL 737 crashed in a midair collision, again an airliner crashed in Brazil.
Tuesday night a TAM Airlines Airbus A320 crashed and burst into flames at Brazil’s busiest airport, Sao Paulo Congonhas Airport, killing at least 200 people.

The plane, Flight JJ3054, coming from Porto Alegre to Sao Paulo, skidded off runway 35L on landing during heavy rain, shot across a busy highway and crashed into several buildings including a gas station. Nobody of the 176 people on board survived, at least 15 were killed on the ground.
Sao Paulo’s airport is notorious for having short, slippery runways. The runway was recently resurfaced, but the cutting of grooves to channel rainwater off the pavement had not been completed.

An airport security camera video of the landing of flight 3054 has emerged on YouTube!

Accident sequence
TAM Flight 3054 was a regular flight from Porto Alegre (POA) to São Paulo-Congonhas (CGH). The Airbus A320 departed Porto Alegre at 17:16. It was raining as the flight approached São Paulo. Initial video images from the airport suggest that the airplane landed fast on runway 35L. It failed to stop and went off the runway. Since the runway is at a higher elevation than the surrounding street and residential area, the A320 probably became airborne, cleared the perimeter fence and a busy highway and collided with a concrete building, bursting into flames.
According to TAM one of the thrust reversers had been deactivated before departure.

Fatalities
TAM confirmed that one off-duty first officer had boarded the flight at the last moment.
This brought the number of occupants to six crew members, 160 passengers+2 small children and nineteen TAM employees.
All 187 passengers and crew were killed. The number of people killed on the ground has not been established yet.

TAM A320
Normal seating arrangement for TAM A320’s is 168 passenger seats.
The maximum certified number of seats by the U.S. FAA is 179
The landing weight was reported to have been 67.200kgs, which is below the certified maximum landing weight (not taking the actual conditions at Congonhas into consideration). 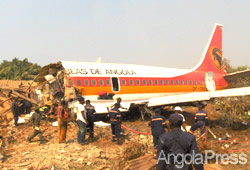 The TAAG Boeing 737 departed Luanda on a domestic flight to M’Banza Congo Airport (SSY) and Negage Airport (GXG). Initial press reports indicated that the airplane crashed on landing. It either touched down short of the runway or went off the runway while attempting to land at M’Banza Congo.
The airport has a single asphalt runway (16/34) which is 1800 m long.

(yomiuri.co.jp) As the summer vacation season approaches, airlines are growing increasingly concerned about children bringing cell phones, portable video game consoles and other electronic devices onto planes, as they could interfere with navigation systems.

Airlines are especially concerned about children’s cell phones, which contain a built-in crime prevention function that automatically restarts the phone if it is switched off.

In March last year, NTT DoCoMo Inc. introduced the Kids Keitai, which includes a built-in global positioning system that allows the handset to send e-mails or transmit a signal notifying parents of their current location.

About 390,000 units had been sold by NTT DoCoMo as of April this year, and KDDI Corp. has also introduced similar models with the same function.

With the number of young passengers set to increase over the holiday period, airlines are planning various measures to warn passengers of the need to restrict the use of such devices.

Though the crime-prevention function on the children’s handsets can be suspended by inputting a preregistered code, many passengers turn the phones off without doing so, meaning the cell phones can restart during the flight.

All Nippon Airways has called on passengers to suspend the function, and since July has been displaying posters that instruct passengers on how to switch off the power properly.

But many passengers forget their suspension codes, meaning they are unable to switch the phones off at the boarding gates.

ANA and Japan Airlines have held talks with cell phone companies over the issue and airlines now have tools onboard planes enabling the removal of batteries, so phones can be switched off without the code.

ANA said the phones have not caused any serious problems. But a company official said if passengers do not know how to switch the phone off they should notify check-in staff or flight attendants.

The latest portable video game consoles, such as the Nintendo DS and Sony’s PlayStation Portable, also are potential sources of trouble for airlines as they are equipped with wireless communication devices for online gaming.

You also may want to read this related article: Why to switch off your cell phone during flight

Kenya Airways flight 507 is a scheduled flight from Abidjan Airport (ABJ), Ivory Coast to Nairobi (NBO) via Douala (DLA), Cameroon. The plane departed Douala at 00:05 and was to arrive in Nairobi at 06:15. Contact with the plane was lost.
The wreckage has not yet been found and the presumed accident location was unclear for some time. Search efforts now focus on the area around Lolodorf where locals reported hearing an explosion. A second site being searched is a mangrove swamp area, where fishermen were reported to have heard a loud bang. This area is 10 minutes away from Douala.
The plane’s identity was rumored to be 5Y-KYA, the first of Kenya Airways’ three brand new Boeing 737-800 planes. This has not been confirmed however.
The weather over two hours after the accident happened (ca 23:20 Z on May 4) was reported as:
FKKD 050200Z 00000KT 9999 TS BKN013 SCT020CB BKN120 24/24 Q1009 NOSIG= [a.o. thunderstorms with 5-7 oktas cloud at 1300ft, 3-4 oktas cloud at 2000ft with thunder clouds and 5-7 oktas cloud at 12000ft, temperature 24C, dewpoint 24C, QNH 1009hPa]

This posting is dedicated to all those people that refuse to follow the security instructions to turn off their cell phones during flight! (Scroll to the end for incidents reported by pilots.)

You want a safe flight, you want to arrive safely at your destination, you even clap after landing but you accept to risk your life and the life of all others just because of some unimportant calls or stupid text messages or just because playing around with it to kill time!?

What’s wrong with you people?

Why do you ignore the instructions to turn your cell phone off? Why do you think those announcements are beeing made? Just to annoy you?

You think your seat is placed far enough away from the cockpit? Wrong! Sensitive systems are placed everywhere throughout the aircraft. Even if placed in the overhead compartment it’s only one foot away from top of the fuselage, where most of the antennas are mounted! Again, it’s not only interfering with radio devices it’s interfering with the whole electronic system. And not only Cell Phones are interfering! Even Laptops, Portable Electronic Game Devices (Gameboy, Nintendo DS, PSP), Radios, CD Players, MP3 Players, Movie Players, Pagers and Handhelds!

This year in January a Boeing 737-400 over Europe lost most of it’s intruments, autopilot changed heading by it’s own to a wrong direction, increased altitude by it’s own and could not be switched off. Navigation instruments showed wrong data and the crew lost control of the airplane. The whole electronic system acted up! 5 times the announcement to switch off cell phones was repeated, and was just ignored! Then the flight attendants checked the passengers and found some guy texting. They switched it off and all the problems were gone! The crew gained back control and all systems worked normally again.

Do you want this to happen to your next flight?

How about some statistics?

“But I’m only texting” – It doesn’t matter what you are doing! If it’s ON it’s interfering and so it’s a security concern!

“My seat neighbor is using his phone, what should I do?” – Tell a Flight Attendant. They will appreciate your notice.

So, next time you fly, don’t be an ignorant dork, follow all instructions and turn your phone off during the whole flight.

After I made this blog post, I received a few messages from some people, claiming the information to be wrong or urban myth. Let me add some lines to clarify:

For those still unwilling to accept that cell phones present a potential hazard, here are some examples of cell phone interferences with aircraft systems – source FAA, NTSB, NASA & other research organisations:

Pilot of a B737, flying for a major US carrier

Pilot of a B737, flying for a major European carrier