The Boeing Company and GE Commercial Aviation Services (GECAS) on Tuesday celebrated the delivery of the leasing company’s 300th Boeing jetliner, a Next-Generation 737-900ER (Extended Range) airplane, that GECAS customer XL Airways will operate under lease. The airplane is equipped with performance-enhancing Blended Winglets, which improve fuel efficiency and reduce CO2 emissions by up to 4 percent, and will be the first 737-900ER to join the XL Airways fleet. 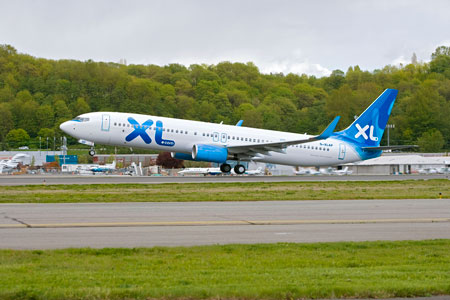 The 737-900ER has substantial economic advantages over competing models, including 6 percent lower operating costs per trip and 4 percent lower operating costs per seat mile than its competitor — which is more than 9,550 pounds (4,340 kg) heavier. The 737-900ER is the latest airplane to join the Next-Generation 737 family, which includes the 737-600, -700, -700ER and -800, and shares the same industry-leading reliability of the other Next-Generation series models.

XL Airways is a charter airline based in the UK and is part of the XL Leisure Group, the third largest travel group in the UK. The airline flies to more than 100 destinations across three continents with a fleet of 37 aircraft.