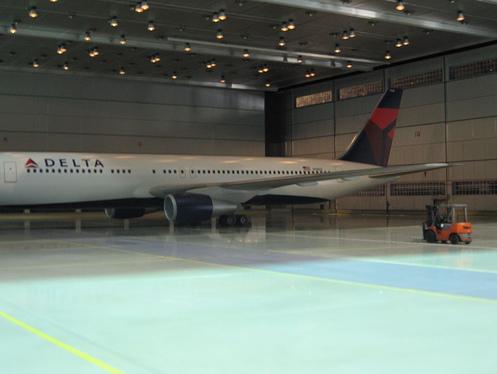 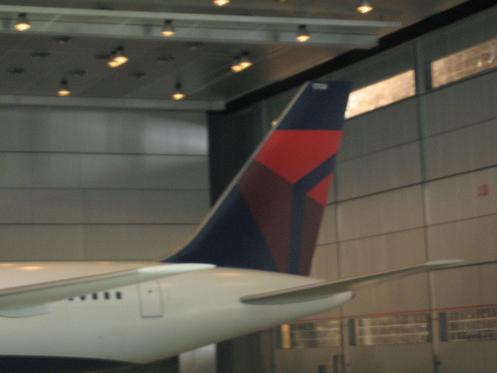 As it nears the end of its bankruptcy case, Delta Air Lines is preparing to roll out a new paint scheme for its jets — the third such repackaging in 10 years.

Delta is expected to unveil the new livery soon after its scheduled emergence from Chapter 11 at the end of this month. The airline isn’t saying much officially, other than to acknowledge a new paint job might be in the works as part of a larger post-bankruptcy marketing campaign.

But word of the project has circulated around Delta and on aviation Web sites such as flyertalk.com and airliners.net.

The main feature of the new design is likely to be the return of Delta’s triangular shield logo, known as “the widget,” to the tail of its jets, according to one employee familiar with the design.

He said a working version features an all-red version of the logo on navy blue tails. The triangular logo — currently red, white and blue — also gets a new three-dimensional look but doesn’t change its basic shape, the employee said. Aircraft colors will also be tweaked, featuring a darker blue that matches recently-revamped employee uniforms, while the main fuselage color will remain white.

Big jets are flying billboards, so airlines take paint schemes seriously. Different managements also use them to put their stamp on a company or as part of broader “re-brandings.”

The current Delta design, with its wavy color bands draped across a logo-less tail, rolled out in 2000 during ex-CEO Leo Mullin’s tenure. One of Mullin’s lieutenants termed it “sophisticated and fluid,” although some wags have termed it the “beach towel” look.

Delta has sought to involve employee groups such as the Delta Board Council, which represents employees at meetings of the carrier’s board of directors.

Not long after he stepped in as CEO in 2004, Grinstein returned to Delta’s traditional widget logo because employees objected to a subtly re-designed version that Mullin had introduced.

But at the time, he professed little interest in a new paint scheme.

“If there’s one thing I’m not going to fiddle with now,” he said at the annual shareholders meeting that year, “it’s the livery of the aircraft.”

8 thoughts on “Delta with new livery”