65 years after an American USAF Lockheed P-38 Lightning ran out of gas and crash-landed on a beach in Wales, the long-forgotten World War II relic has emerged from the surf and sand where it lay buried. The aircraft is believed to be P-38F USAAF serial number 41-7677 assigned to the 49th Squadron, 14th Fighter Group, 8th Air Force. Experts hope to recover the plane for a British military museum. 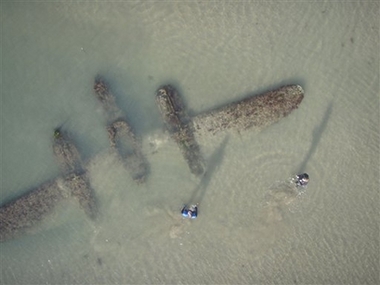 Sunbathers and swimmers often frolicked within a few yards of the aircraft, unaware of its existence until last summer, when unusual weather caused the sand to shift and erode.
The revelation of the Lockheed “Lightning” fighter has stirred interest in British aviation circles and among officials of the country’s aircraft museums, ready to reclaim another artifact from history’s greatest armed conflict.
Based on its serial number and other records, “the fighter is arguably the oldest P-38 in existence, and the oldest surviving 8th Air Force combat aircraft of any type,” said Ric Gillespie, who heads a U.S.-based nonprofit group dedicated to preserving historic aircraft. “In that respect it’s a major find, of exceptional interest to British and American aviation historians.”
Gillespie’s organization, the International Group for Historic Aircraft Recovery, learned of the plane’s existence in September from a British air history enthusiast and sent a team to survey the site last month. The group plans to collaborate with British museum experts in recovering aircraft next spring. The aircraft is largely intact and remarkably free of corrosion.
“The difficult part is to keep such a dramatic discovery secret. Looting of historic wrecks, aircraft or ships, is a major problem, in Britain as it is worldwide,” Gillespie said.

British aviation publications have been circumspect about disclosing the exact location, and local Welsh authorities have agreed to keep the plane under surveillance whenever it is exposed by the tides of the Irish Sea, he said. For now, the aircraft is again buried under sand.
Officially, the U.S. Air Force considers any aircraft lost before Nov. 19, 1961 — when a fire destroyed many records — as “formally abandoned,” and has an interest in such cases only if human remains are involved.

The Wales Lightning, built in 1941, reached Britain in early 1942 and flew combat missions along the Dutch-Belgian coast. On September 27, 1942, fuel exhaustion during a training mission forced 2nd Lt. R. Frederick Elliott to land the large twin-engine fighter in shallow water near a beach in Wales. His belly landing sheared off a wingtip, but Elliott escaped unhurt. Less than three months later, the veteran of more than 10 combat missions was shot down over Tunisia, in North Africa. His plane and body were never found.

Following the accident, 8th Air Force authorities disarmed, but did not salvage, the aircraft which was soon covered by the shifting sand beneath the surf. At the time of Lt. Elliott’s mishap, few civilians in the local area were aware of the accident because the beaches in the United Kingdom were closed to the public during World War II and the press was not allowed to print stories about Allied wrecks. After the war, recreational use of the beaches resumed but the Lightning remained hidden.

The twin-engine P-38, a radical design conceived by Lockheed design genius Clarence “Kelly” Johnson in the late 1930s, became one of the war’s most successful fighter planes, serving in Europe and the Pacific. First delivered to the U.S. Army Air Corps in June 1941, the Lockheed P-38 was the only American fighter to remain in continuous production for the entire duration of the United States’ involvement in the Second World War. A total of 10,037 examples were built. An estimated thirty-two complete or partial airframes survive in museums and private collections worldwide. Approximately ten aircraft are reportedly airworthy. A similar number are displayed as extensively restored non-flying aircraft. The remaining airframes exist only as wreckage or parts to be used in rebuilds. Only one Lightning, the Smithsonian National Air & Space Museum’s P-38J 42-67762, a former training aircraft, survives as an original, unrestored example of the type.

The P-38F was the first model to see combat but no original example of the mark survives in any collection. Nearly all existing P-38s are late-production G, H, J and L models. In Papua New Guinea, components from four P-38F hulks (42-12647, 42-12652, 42-13084, and 42-13105) are reportedly being used to re-construct a single composite aircraft. Another P-38F, 41-7630, was recovered from under the Greenland icecap in 1992 and subsequently re-manufactured as “Glacier Girl” to create an airworthy P-38F. While attractive and evocative, the flyable aircraft is essentially a new P-38.
Developed to a United States Army Air Corps requirement, the P-38 had distinctive twin booms and a single, central nacelle containing the pilot and armament. The aircraft was used in a number of different roles, including dive bombing, level bombing, ground strafing, photo reconnaissance missions, and extensively as a long-range escort fighter when equipped with droppable fuel tanks under its wings. The P-38 was used most extensively and successfully in the Pacific Theater of Operations and the China-Burma-India Theater of Operations, where it was flown by the American pilots with the highest number of aerial victories to this date. America’s top ace Richard Bong earned 40 victories (in a Lightning he called Marge), and Thomas McGuire (in Pudgy) scored 38. In the South West Pacific theater, it was a primary fighter of United States Army Air Forces until the appearance of large numbers of P-51D Mustangs toward the end of the war.