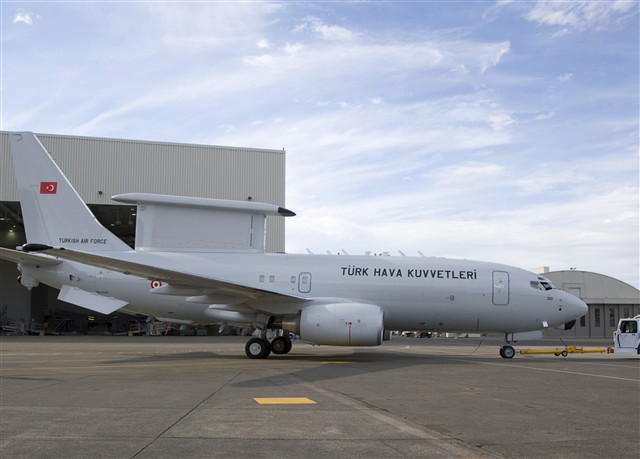 A newly painted Peace Eagle Airborne Early Warning and Control (AEW&C) aircraft is shown in Turkish Air Force colors outside a Boeing hangar in Seattle, Wash.
The aircraft will make its first international flight this month when it travels to the Dubai Air Show in the United Arab Emirates, where it will be on static display Nov. 11-15.
Boeing is building the first of four AEW&C aircraft for Turkey’s Peace Eagle program in Seattle while Turkish Aerospace Industries in Ankara, Turkey, is building the remaining three aircraft with significant participation from various Turkish industry suppliers. Functional checkout of the mission systems is under way with development flight testing beginning next year.

The 737 AEW&C, selected by the Turkish Air Force under Project Peace Eagle, is based on the 737-700. The official name of the 737 AEW&C is: 737-700 Airborne Early Warning & Control, Multi-role Electronically Scanned Array RADAR Antenna (737-700 AEW&C MESA RADAR Antenna). The aircraft uses the Northrop Grumman Electronic Systems Multi-role Electronically Scanned Array (MESA) radar. The radar is located on a dorsal fin on top of the fuselage, dubbed the “top hat”, and is designed for minimal aerodynamic effect. The radar is capable of simultaneous air and sea search, fighter control and area search. Other modifications include ventral fins to counterbalance the radar and countermeasures mounted on the nose, wingtips and tail. The cabin features eight operator consoles with sufficient space for four more; the Australian fleet will operate ten consoles with space for two more.
Currently the 737 AEW&C is operated by Australia, Turkey and South Korea. Potential customers are Italy and the United Arab Emirates.