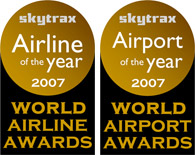 View all results in detail at http://www.worldairlineawards.com/main/aoy-2007-release.htm

I’m a little bit disappointed that my favorite airline Cathay Pacific is again only ranked 3rd 🙁
If you like, post your top airlines in the comments!