This picture shows the Boeing 747 Large Cargo Freighter (LCF) “Dreamlifter” from inside the cargo compartment. The cargo hold has a volume of 65,000 cubic feet (1,840 cubic meters). The Dreamlifter is a modified Boeing 747-400 used exclusively for transporting aircraft parts to Boeing from suppliers around the world. 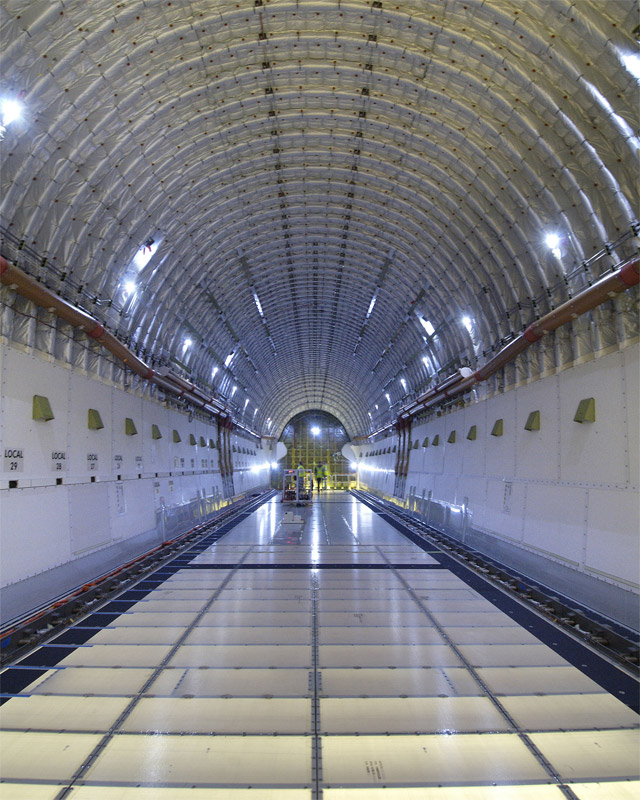 Three used passenger 747-400 aircraft were to be converted into an outsize configuration in order to ferry sub-assemblies from Japan and Italy to Charleston, South Carolina and then to Everett, Washington for final assembly. The Large Cargo Freighter has a bulging fuselage similar in concept to the Super Guppy and Airbus A300-600ST Beluga outsize cargo aircraft, which are also used for transporting wings and fuselage sections. It can hold three times the volume of a 747-400F freighter. The LCF is not a Boeing production model and will not be sold to any customers or see any airliner operation, and will be for Boeing’s exclusive use.

In December 2006, Boeing announced the LCF would also be known as the Dreamlifter, a reference to the 787’s name, the Dreamliner. It unveiled a standard livery for the aircraft that included a Dreamlifter logo reminiscent of the 787’s Dreamliner logo.

The certification was to be in early 2007 however it has been pushed back to June 2007. The plane had its winglets removed after excess vibration and other handling characteristics need to be dealt with prior to final certification. In the meantime as part of the flight test program, LCF delivered major sections of the 787 Dreamliner from partner sites around the world to the Boeing factory in Everett, WA for final assembly.
The LCF is probably one of the ugliest planes ever built. Even the Boeing Commercial Airplanes president apologized to the designer of the 747 that he was “sorry for what we did to your plane.”
Photo Credit: Boeing