Airbus A380 production moves ahead with the next new operator of the A380 – Korean Air.
Four A380s for Korean Air are now in production. The first aircraft is currently being prepared for its maiden flight, with the second and third aircraft now positioned next to each other in the main assembly hall. Meanwhile the joining of the wings and main fuselage sections of the fourth aircraft has just been completed.
First delivery is scheduled for May 2011 with the next three following in June, July and August. From 2012-2014, additional aircraft will be introduced, bringing the total to ten. 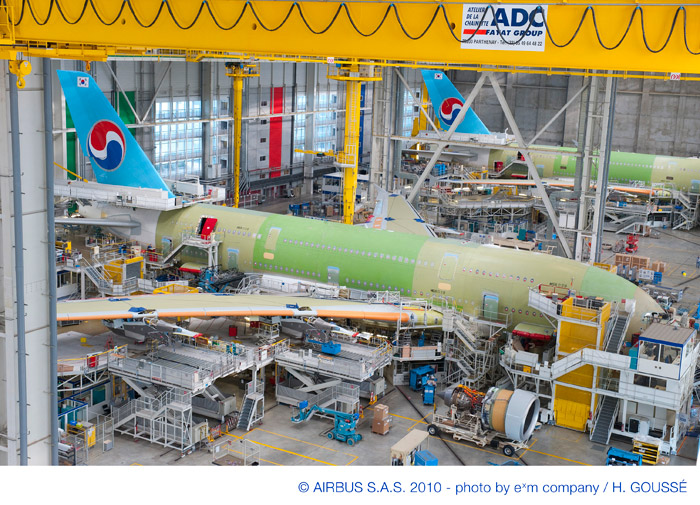 Korean Air will be the first Asian airline to use the aircraft on transpacific routes between the US and Asia. The double-decker airplane will be outfitted with between 400 and 450 seats, making it the most spacious A380 anywhere.

“The reduced seating layout will expand cabin space and provide customers with a truly luxurious air travel experience,” says Korean Air’s Americas Marketing Director, John Jackson. “We are designing the cabin to promote relaxing air travel, and will incorporate some unique features to be revealed later.”

Korean Air will be the 6th carrier to introduce the A380 into its fleet.