The FAA alleges that Hillsboro mechanics used incorrect parts and an unqualified individual to make repairs to a Bell 206 Jet Ranger helicopter. The FAA also alleges the company made no record in the aircraft maintenance logs of work performed, and deliberately falsified maintenance documents claiming an airworthiness directive had been completed when the work had not been done. 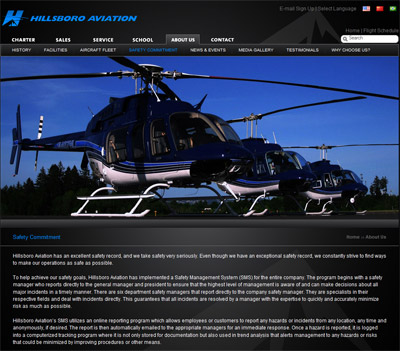 The FAA also alleges that Hillsboro mechanics failed to perform the required inspections after specified flight intervals on another Jet Ranger helicopter when the aircraft returned to service after maintenance. Hillsboro operated the aircraft on at least 430 flights, including at least 349 revenue flights under Part 135 between Jan. 13 and Sept. 7, 2008.

The third violation involved the operation of another Jet Ranger on a passenger-carrying flight, July 8, 2008. The pilot flew under the Interstate 5 and 205 highway bridges over the Columbia River in Portland, Ore. The FAA alleged the flight endangered the lives and property of others, because it was conducted within 500 feet of a structure, and at a low altitude where a safe emergency landing might not have been possible.