A STOVL (short takeoff/vertical landing) variant of the Lockheed Martin F-35 Lightning II stealth fighter has become the first F-35 to complete an aerial refueling test using the Navy- and Marine Corps-style probe-and-drogue refueling system. This mission is the first in a short series of tests that will clear the STOVL F-35B variant for extended-range flights, particularly to its primary test site at Naval Air Station Patuxent River, Md. 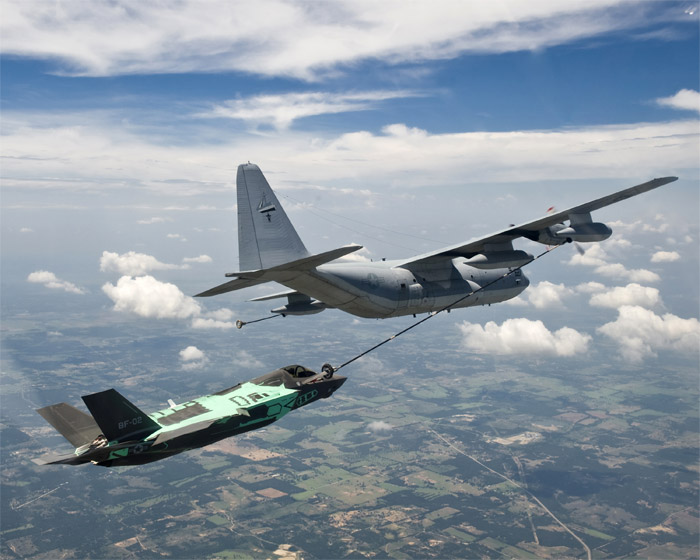 The refueling mission also marked the first time a Lockheed Martin KC-130J tanker has been used to refuel an F-35. Since deployment to Iraq in 2005 the KC-130J has offloaded more than 186 million pounds of fuel during combat operations. Previous refueling missions with the F-35A conventional takeoff and landing variant were accomplished with a KC-135 tanker. To date, the first F-35A has received approximately 110,000 pounds of fuel during aerial refuelings.

Probe-and-drogue refueling employs a flexible hose that trails from the tanker aircraft. The basketlike drogue at the end of the hose connects to the receiving aircraft’s probe, which, in the case of the F-35, resides on the right side of the forward fuselage and retracts when not in use. The U.S. Navy, Marine Corps and the air forces of many other countries use the probe/drogue system, while the U.S. Air Force refuels its aircraft via a rigid flying boom that inserts into a receptacle on the receiving airplane.

The Lockheed Martin F-35 and F-22 are the world’s only 5th generation fighters, uniquely characterized by a combination of advanced stealth with supersonic speed and high agility, sensor fusion, network-enabled capabilities and advanced sustainment. The three F-35 variants are derived from a common design, are being developed together and will use the same sustainment infrastructure worldwide, bringing economies of commonality and scale.