The aircraft is the first of three developmental test C-5M aircraft to be delivered, with the other two to be delivered to Dover AFB, Del., in February 2009. Current Air Force plans call for Lockheed Martin to deliver 52 modernized C-5Ms.

“The C-5 fleet is now beginning to realize its full operational potential as we begin fielding both Avionics Modernization Program and Reliability Enhancement and Re-engining Program enhanced C-5s for the Air Force,” said Lorraine Martin, vice president of the C-5 Program at Lockheed Martin. “The combined U.S. Air Force and Lockheed Martin team can take great pride in its success, which is keeping this national strategic airlift asset viable for decades to come.” 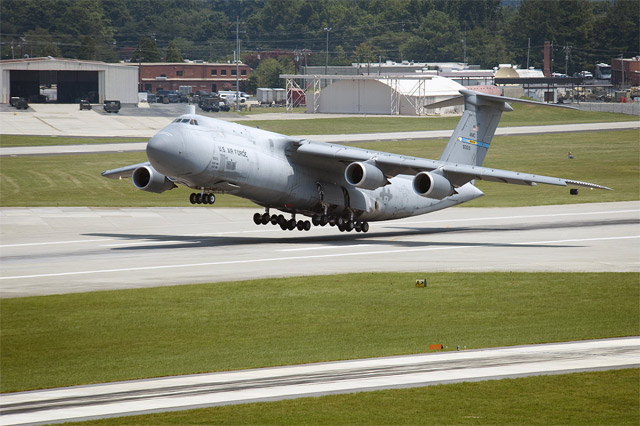 The C-5M Super Galaxy is the product of a two-phase modernization effort. The Avionics Modernization Program (AMP) provides a state-of-the-art glass cockpit and a digital backbone to support the Reliability Enhancement and Re-engining Program (RERP) modifications. 46 C-5 aircraft have completed the AMP modifications. The aircraft already returned to the fleet have logged more than 45,000 hours with the new systems, including many hours flown in support of Operation Iraqi Freedom.

RERP is the second phase of the modernization effort, which adds new GE CF6-80C2 commercial engines (military designation F138-GE-100) and 70 other enhancements or replacements of major components and subsystems. The additional 10,000 lbs of thrust per propulsion system creates 40,000 lbs of additional thrust across the platform, significantly improving operational performance. This comprehensive modernization program improves the fleet mission-capable rate (aircraft availability) and the overall reliability and maintainability of the aircraft while reducing total ownership costs.

The C-5 has been the backbone of strategic airlift in every engagement since it entered service. It is the only aircraft capable of carrying 100 percent of certified air-transportable cargo, with a dedicated passenger compartment enabling commanders to have troops and their equipment arrive in an area of operation simultaneously. The C-5 can carry twice the cargo of other strategic airlift systems. With more than 70 percent of its structural service life remaining, Lockheed Martin is committed to sustaining the C-5 fleet throughout its lifecycle. The C-5M Super Galaxy will continue to be a force enabler through 2040.