Today, the French Bureau of Enquiry and Analysis for Civil Aviation Safety (BEA) has released a first intermediate investigation report on the Air France flight 447 crash from June 1.

The report reveals that the plane (Airbus A330-200 F-GZCP / MSN: 660) was not destroyed in flight and had likely struck the surface of the water in a straight line, with a high rate vertical acceleration.

The airplane had taken off from Rio de Janeiro without any known technical problems, except on one of the three radio handling panels. No problems were indicated by the crew to Air France or during contacts with the Brazilian controllers. No distress messages were received by the control centres or by other airplanes. The last radio exchange between the crew and Brazilian ATC occurred at 1 h 35 min 15 s. The airplane then arrived at the edge of radar range of the Brazilian control centres. At 2 h 01, the crew tried, without success for the third time, to connect to the Dakar ATC ADS-C system. Up to the last automatic position point, received at 2 h 10 min 35 s, the flight had followed the route indicated in the flight plan.

Weather
The meteorological situation was typical of that encountered in the month of June in the inter-tropical convergence zone. There were powerful cumulonimbus clusters on the route of AF447. Some of them could have been the centre of some notable turbulence. Several airplanes that were flying before and after AF 447, at about the same altitude, altered their routes in order to avoid cloud masses. 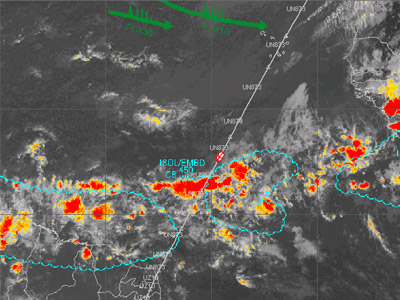 ACARS
Twenty-four automatic maintenance messages were received between 2 h 10 and 2 h 15 via the ACARS system. These messages show inconsistency between the measured speeds as well as the associated consequences. Before 2 h 10, no maintenance messages had been received from AF 447, with the exception of two messages relating to the configuration of the toilets.
The last ACARS message was received towards 2 h 14 min 28 s.

Investigation of the recovered tail fin showed that the frames broke during a forward motion with a slight twisting component towards the left. A recovered galley was not very distorted. Baskets and racks were compressed in the lower part of both galley carts. The distortions observed in the metal vertical reinforcements of a toilet door showed evidence of great compressive forces. Fragments of the walls of the flight crew rest area were crumpled and those of the ceiling were deformed downwards. The floor was curved under the effect of a strong upward pressure from below. The connecting brackets between the floor and the walls were bent
backwards.

The agency also published further in-depth details about the weather at time of the crash, information about pitot probes, location of wreckage, as well as the general condition of the plane prior to the accident.
Also included in this investigation report is the full ATC transcript as well as some new photos of recovered wreckage.

Links
Intermediate Investigation Report (English) – Does NOT include several additional information such as ATC transcript and weather details!:
http://www.bea.aero/docspa/2009/f-cp090601e1.en/pdf/f-cp090601e1.en.pdf

One thought on “Intermediate Report on Air France Flight 447 Crash”