Embraer delivered the first Embraer 170 jet to Japan’s Fuji Dream Airlines, a company of the Suzuyo Group. The airline has ordered another Embraer 170, which is scheduled for delivery later this year.

“Beginning deliveries to a new customer is always a challenging milestone for us. The specific case of Fuji Dream is more than that, since we’re taking part in the birth of a brand-new airline in a highly competitive and demanding market like Japan,” stated Mauro Kern, Embraer Executive Vice President, Airline Market. “We are proud to be a part of this business initiative headed by an energetic airline like Fuji Dream.” 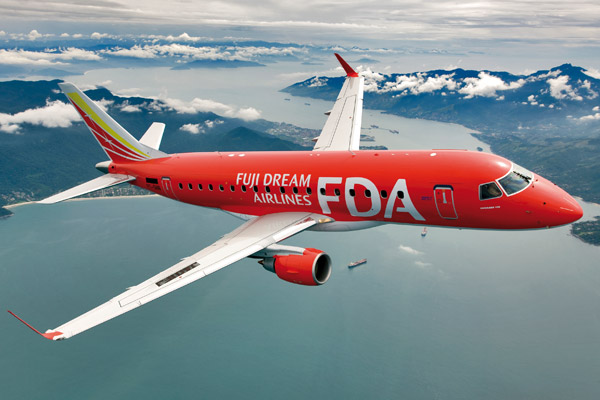 This Embraer 170 from Fuji Dream can comfortably carry up to 76 passengers in a singleclass layout, and will operate out of Mt. Fuji Shizuoka Airport, in central Japan. Shizuoka Airport is currently under construction and is expected to be completed and operational by July, 2009. Fuji Dream will operate 1 daily flight to Kagoshima, 1 to Kumamoto, and 2 daily flights to Komatsu.

Fuji Dream Airlines was incorporated in June 2008 to be the Suzuyo Group’s air transportation arm.
By entering the airline business and building on the convenience of Mt. Fuji Shizuoka Airport, Suzuyo Group contributes to Shizuoka’s economic development.