“Both the A320 Family and A330 have served us very well, and we look forward to capitalizing on the advantages the A350 XWB will add to our fleet,” said Doug Parker, Chairman and CEO of US Airways. “The combination of range, comfort and economics all these aircraft feature will offer our passengers the ideal service they have come to expect from US Airways.” Both America West and US Airways took delivery of their first A320 Family aircraft in 1998. Since that time, and since the airlines have joined forces under the US Airways brand, the airline has become the largest airline customer for Airbus in terms of aircraft ordered and aircraft operated.

“This order is a clear endorsement of every member of our twin-engine product line,” said John Leahy, Airbus Chief Operating Officer, Customers. “These aircraft work hard for the airline, and have the right balance of characteristics to please our customer and their customers. With the A350 being a major part of this contract, we’re very happy US Airways has decided to expand its fleet types in parallel with the evolution of the Airbus product line. 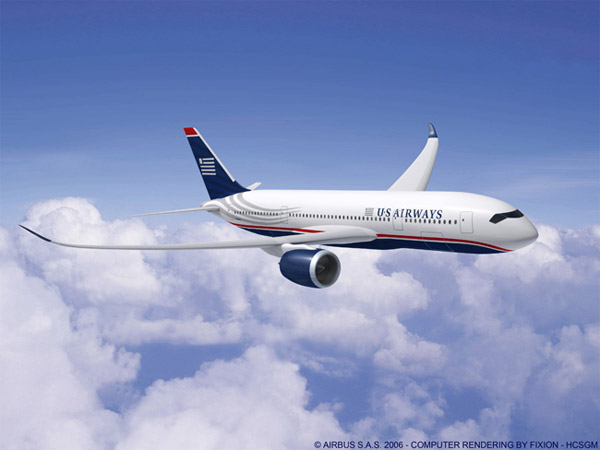 GoAir, ‘The Fly Smart Airline’, based in Mumbai, has taken delivery of its first A320 aircraft purchased directly from Airbus. The aircraft powered by CFM International engines was handed over to GoAir in a ceremony in Toulouse.

The delivery is the first from an agreement for a total of 10 Airbus A320 family ordered at the Farnborough air show in 2006. All the aircraft from this order will seat 180 passengers in an all-economy layout.

“Today is a remarkable day in the growth of our airline and in its future success. Bringing these aircraft into service will allow GoAir to expand services to major business and leisure destinations across India and to offer new routes not previously served by air. We are excited about being able to offer the “Fly Smart” experience to more cities and passengers throughout India”, said Jeh Wadia, Managing Director, GoAir.

“We are delighted that Airbus has been a part of the GoAir success story and are proud our aircraft, the world’s most modern and most advanced single aisle airliner has been instrumental in this. All of us at Airbus wish GoAir a very bright future”, said John Leahy, Airbus Chief Operating Officer, Customers.

Ural Airlines, one of the leading Russian airlines, has signed a firm contract for the first time with Airbus, for the acquisition of seven A320s. It comes as a confirmation of the Memorandum of Understanding that was announced in June 2007 at the Paris air show. With this deal, Ural Airlines becomes a new Airbus customer.

Ural Airlines’ A320s will feature the all-new cabin that recently entered service on other members of the A320 Family, which provides more passenger comfort in a modern and brighter environment. The ordered aircraft will accommodate up to 160 passengers in a two-class configuration. The choice of engines has yet to be made. The airline plans to operate these aircraft on its international and domestic routes. Currently Ural Airlines operates two leased A320s on routes from Ekaterinburg to Moscow, Hurgada, Sharm-El-Sheikh, Munich, Dusseldorf, Prague, Bangkok, Delhi and Tianjin.

“The deal with Airbus became the most important event of the year for us”, said Sergej Skuratov, Ural Airlines CEO. “We have chosen A320, because this aircraft meets our demands in terms of operational efficiency, comfort and reliability. The conducted surveys give us the grounds to state that the purchase of Airbus aircraft is a win-win deal for both the airline and the passengers.”

“We are proud to welcome Ural Airlines as a new Airbus customer. We are sure that the aircraft’s advanced technology and efficiency, as well as its popularity with passengers and crews, and its market-leading environmental characteristics, will greatly contribute to Ural Airlines continued growth,” said John Leahy, Airbus Chief Operating Officer, Customers.

With advanced fuel-saving aerodynamic design, including wingtip fences and an all-new lighter cabin helping reduce fuel burn even further, the A320 Family is the most environmentally friendly aircraft type in operation. Centralised maintenance with extended servicing intervals and proven reliability in day-to-day service help to give it the lowest operative costs. In addition, the all new cabin design saves on weight and offers the passenger a quieter and roomier experience as well as significantly larger overhead stowage compartments. The A320 Family, which also includes the A318, A319 and A321, is recognised as the benchmark in the single-aisle aircraft market.

“We thoroughly reviewed the A350 XWB programme, and we are very confident that this aircraft will set new standards of passenger comfort, operating economics and low emissions in our growing long-haul markets. The size of the A350-900 XWB responds very well to our expected traffic growth over the next decade,” said Mr Nguyen Sy Hung, Chairman and CEO of Vietnam Airlines. “Our A330s already provide us with an excellent level of economics combined with superior passenger appeal. The A350 XWB will further consolidate our successful growth and long term development into the future.”

“We are very proud to have one of the most successful and well respected airline like Vietnam Airlines to confirm its choice for the A350 XWB”, said Thomas Enders, Airbus Chief Executive Officer. “We are very grateful for this strong endorsement of the A350 XWB programme, and together with the additional A321s, we are also pleased to be playing a major role in Vietnam Airlines’ continued expansion of its regional network. We are delighted with our long-standing partnership with Vietnam Airlines, and look forward to continuing this relationship into the future.”